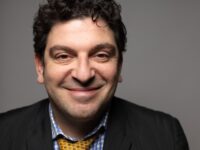 Ben Sures is an Edmonton based singer and songwriter. He has played across Canada at festivals and concerts. He is well known to past listeners of CBC radio. In 2005 his album ‘Gone to Bolivia’ included an original composition called ’The Boy Who Walked Backwards Through The Snow’ a song based on a the true story of residential school survivor Leo Day from Serpent River First Nation. The story was originally told to him by Leo’s daughter Janet Day. Ben felt in addition to being a good song it would make an interesting book for children. The main reason being that in the end Leo is a hero and manages to outsmart the nuns looking for him and finds a way to out manoeuvre the residential school system by hiding in the forest, thus keeping his culture, language and dignity. With the blessing of Leo’s family, Sures wrote ’The Boy Who Walked Backwards’ published by The Manitoba First Nations Education Resource. www.bensures.com

Ben Sures has appeared on  the Alberta and Saskatchewan weekend morning shows on CBC radio and The Next Chapter with Shelagh Rogers to discuss the book. https://www.youtube.com/watch?v=7hq9V3_2zNY

Ben will narrate his book, sing a couple songs with the kids and answer questions about the book.  Presentations are 30 minute long. Ben requires a PDF reader and someone to click through the pages as he presents.

“This is a challenging and beautiful story, keeping us aware of the true values in life, family and love.”

“It was quite a clever and interesting story. Definitely not your normal Residential school story. And it was based on a real story to boot! Even better!  Excellent and innovative YA book.”